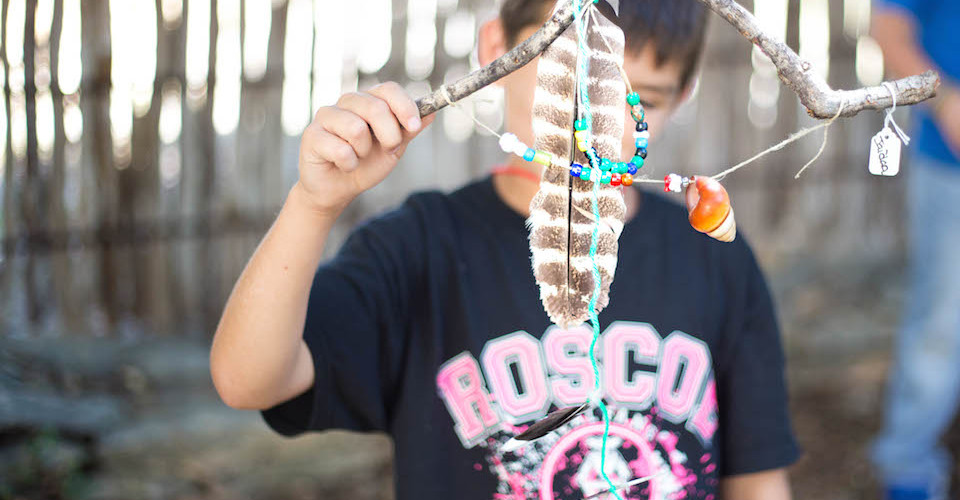 Before beginning to make your own talking stick, read the information below about the native American Indians who lived on the Rolling Plains. Read how the talking stick was used and its value and meaning for the Indians in the early days in Texas.

Long before white settlers came to Texas, the Comanche Indians lived in teepees on the grasslands and in the canyons of the Rolling Plains. They rode horses and hunted buffalo. When the tribes held councils (meetings) they often used a talking stick. If you had been 8/9/10/11 years old, your life as a young Comanche Indian child would have included watching your elders at council meetings. You, as an Indian child, would have been taught to listen and to respect others and allow all to speak. Your tribe believed that whoever held the talking stick is given wisdom and courage to speak truthfully and wisely.

The Talking Stick was used in Native American gatherings and meetings to give one person the freedom to speak without interruption from the others. It was used by the person who was leading the meeting, and can either be passed around the circle so that each person who has something to say can speak, or it can be given just to those who ask for it. The person with the talking stick is given respect and all listen without interrupting. It usually has a special meaning to the tribe or village, and is decorated with colors and objects which also have special meanings.

To do this activity, you will have to go outside and begin to collect some things. You might want to review the Five Senses activity – remember to take your tools with you – reconnect with nature. When finding what you want… smell it… feel it.. listen to it..see it’s colors and textures.

For the Native American, the ornamentation (decoration) on each stick had meaning. In the Comanche tradition, red is for life, yellow was for knowledge, light blue was for prayer and wisdom, white was for spirit, green was for healing, dark blue was for feeling kinship with all living things, black was for clarity and focus. You might think about these colors when you choose the yarn or thread you want to use to attach the items you have chosen.

The stick: When I decided to make a talking stick for myself, I went out into my yard and began looking up into the trees and on the ground for the perfect stick. I would pick up a stick and then put it down, until I found the one that suited me and felt good in my hand.

The rock: I often find flint rock where I live. Flint rock was used by the Native Americans for the tip of their arrows. When I would find a piece of flint, I would look to see if it had been chipped in a way to look like the point of an arrow – thus the name arrowhead. I have several flint arrowheads in my house, so I decided I would attach one to my talking stick. When you find your rock, feel of it, observe it closely, even smell of it.

The yarn, ribbon, or string: I found some multi-colored string and some ribbons. I wrapped my talking stick with the multi-colored string. I chose red, blue, and green ribbons to attach the items to my talking stick. You can read about the meaning of the colors what those colors meant to the Native Americans and figure out why I chose those colors.

The feathers & wildflower: I found 2 different feathers in my back yard out near my bird feeder. The smallest feather is from a guinea that visits the bird feeder when the bird seed has been scattered on the ground. The other feather is from a dove. I picked a chocolate daisy from my flower bed. This wildflower is my favorite and it was used by the Native Americans to flavor their food. Can you guess what that flavor is? If you ever find one, just smell it and you will know.

Here is the talking stick that I made. I hope you have fun making yours.

Can you find Cowboy Joe in this picture?